The startup company hierarchy of needs

I've been focusing on different themes than usual with regard to my company and I've come to realize it might just be a mental shift on the Maslow pyramid.

We are still a tiny company (just 4 people) and our business isn't large in terms of income, but I think it's probably enough for me to trigger a shift into my thoughts.

Maslow's hierarchy of needs describes the stages in human growth and it seems to apply just as well to a company: 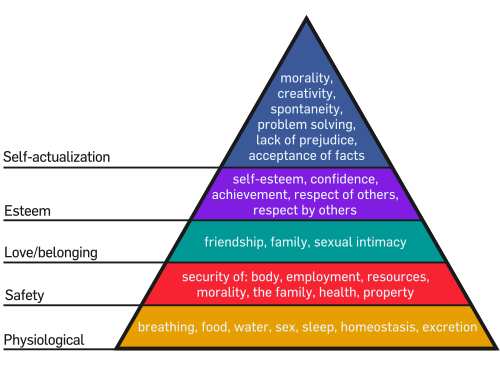 The lowest level in the Maslow pyramid are the physiological needs. These are the basic survival needs: air, water, food, shelter and sex.

There is nothing fancy here. A company at this stage is basically aiming for that ramen profitability. Everything else are mostly nice thoughts, because the immediate future is all about corporate survival.

When I first started my company, this was the most important thing. I didn't care about anything else, except knowing that I had customers and I was profitable. Of course, personally I've been lucky to have some nice and decent customers where I worked on some interesting stuff, but from a corporate standpoint it was all about being profitable and having projects to keep me, and later my team, busy and liquid.

Wikipedia has a nice explanation:

These needs have to do with people's yearning for a predictable orderly world in which perceived unfairness and inconsistency are under control, the familiar frequent and the unfamiliar rare.

This is where I find myself to be since about last summer...

Ever since the financial crisis came in Romania too, the government has made a lot of unexpected and rash changes: laws changed over night, tax legislation changed, corporate expenses limited by law in weird ways.

So, I've started yearning for some predictable legislation (fiscal, labour, etc) as well as a reduced threat of corruption.

I still haven't found a solution to this. Since changing Romania first is impractical, I've been reading a lot about incorporating into other countries.

This is a complicated equation involving corporate specific variables such as taxation, accounting expenses, rent as well as personal variables: I'd probably need to relocate or travel a whole lot more and that's hard.

Love and belonging has two levels in a company: internal and external.

Internally I don't think we have a particularly strong belonging feeling since we were very focused on just getting the job done. We are distributed in 3 cities quite far away so there is no physical closeness which I think hinders us a bit.

This is something we should work at, but I guess it's not on the list yet. One of my future plans is maybe get an actual corporate office but that's a problem in itself and it would split us: 2 guys would work in an office and 2 guys 500km away.

Externally, the company sends upstream bugfixes for the open-source code we work on, we support the localization effort into Romanian of an open-source product and this year I want to get a junior researcher / student into a part-time position doing open research (it's basically a sponsorship disguised as a job since legally it's way simpler).

But, sadly, the company isn't involved at all in the local community.

So far the company is very low level and mostly "behind the scenes". We basically do contract work so the end users never know anything about our involvement.

It would be nice to be known by our users and even nicer to be independent and actually sell products to end users directly. But we are not there yet.

"What a man can be, he must be." Realizing the full potential.

I'm not even sure what to speculate here. I believe we have something interesting and I'm rather proud of my team but I couldn't say exactly what the full potential is. Still searching this one.

Maslaw's pyramid seems to be a quite nice simplification. Of course, the layers intertwine and evolution isn't linear like that but it seems to apply quite nicely for a startup too (which isn't entirely surprising since a company is a social construct.)

It might be an interesting exercise to analyze your own startup through this hierarchy and see where do you stand as well as what you should be focusing on.
at March 28, 2011 1 comment:

The IDE must move onto the server

Here is a video of my prototype online IDE (watch it in 720p if possible):

It's basically a subset of how I think a browser-based IDE should look like and where we should get, pretty soon.

I've just focused on some essential parts in my prototype:


The most important thing is the editor: I still don't see a good Javascript-based editor and certainly not one for Java, which is what I would need.

The next thing is the proper integration of the various external tools. You could hook the build server test results and findbugs warnings straight into editor hints or error stripe, for example.

I also think nobody is focusing on the kind of automated learning we could apply to projects once everything is in one place. Nothing says progress like a browser Clippy saying Hey, it looks like you're solving almost the same threading problem as John did on this other bug 3 months ago.

All in all, my work is just a prototype. But I do hope that in the near future I wouldn't need a workstation to do my job -- just a humble device with a decent network connection.
at March 14, 2011 3 comments:

Roam Like at Home is a regression for Romania

On June 15th 2017 the EU launched "Roam Like at Home", a set of rules that removed roaming charges. It was a great idea to harmon...